I'm normally great at secrets, with a couple of exceptions. One of those exceptions is Aaron - I tell Aaron everything. I don't think any of his Christmas or birthday gifts have ever been a surprise…if he doesn't know right after I find them, I end up telling him before whatever the event. (In my defense, most of the time it's because his gift is SUPER COOL and he has to know right then to appreciate the fabulousness of whatever it is as soon as possible.)

Sooo, on the morning that we found out that we were going to be parents, of course I couldn't keep that secret either! :) Aaron and I both had to work that day, and I'd thought that maybe it was a possibility…but I didn't want to say anything to Aaron if there wasn't anything to say! So I'd intended to get up early, take a test, and then if it was positive we'd have a moment before he left. Well, I missed my first alarm, and barely had a chance to take a test and stash it under the sink (you know, to wait the two minutes or whatever it was) before he got out of the shower. I started the stopwatch on my phone, and then promptly got distracted doing other things… Aaron left for work, and I went back to check on the test, and there were two lines (insert scramble for the directions, because what did two lines mean again?) But when I looked at the stopwatch, the time had gone over, plus it was a dollar store test, and of course if it's only $1 it's probably not accurate. Four dollar store tests and one "real" one later, I called Aaron. :)

Life has been pretty crazy since then, and I'm sure things will be a whirlwind from now on! Aaron and I are both ecstatic, and can't wait to meet our little one! :) I know I've been pretty quiet around the blog lately. Between maintaining service standards for my fabulous clients as well as dealing with morning sickness, my plate has been pretty full! What that does mean though is that there are many many fabulous sessions of gorgeous people that I can't wait to share, and I'll be working to update with those sessions as I can. :) For now though, baby news!

Due: beginning of November 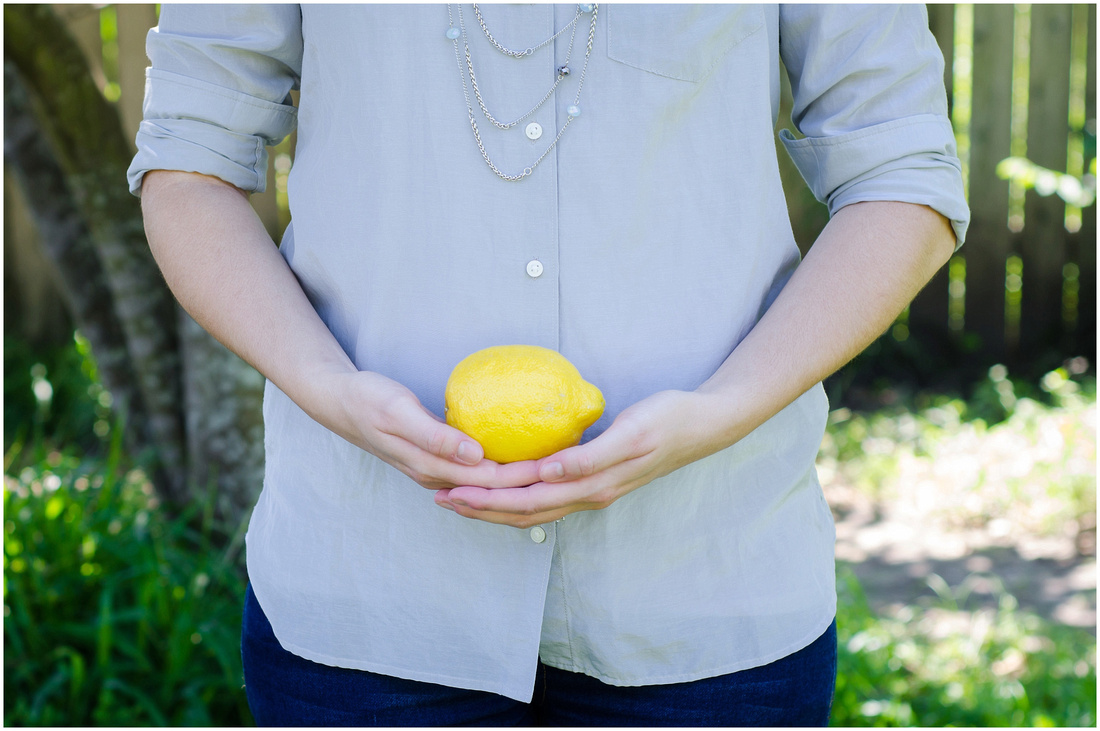 Skills and facts:  Swimming around (during our appointment this week, Baby kept trying to avoid the dopler - lots of movement! Or it could have been because of the tea and coffee I had before the appointment?) Baby is starting to be able to hear outside sounds this week! So I can really talk to it without feeling silly. :) Its thyroid is developing, kidneys are functioning, and fingers are well differentiated.

First ultrasound: happened March 19th. Yes it was early, but I needed to see the munchkin/hear a heart beat, and scheduling the ultrasound was absolutely one of the best decisions ever! Plus it's nice to be able to look at pictures after throwing up, and remember that there's a really fabulous reason that all of the yucky stuff happens. 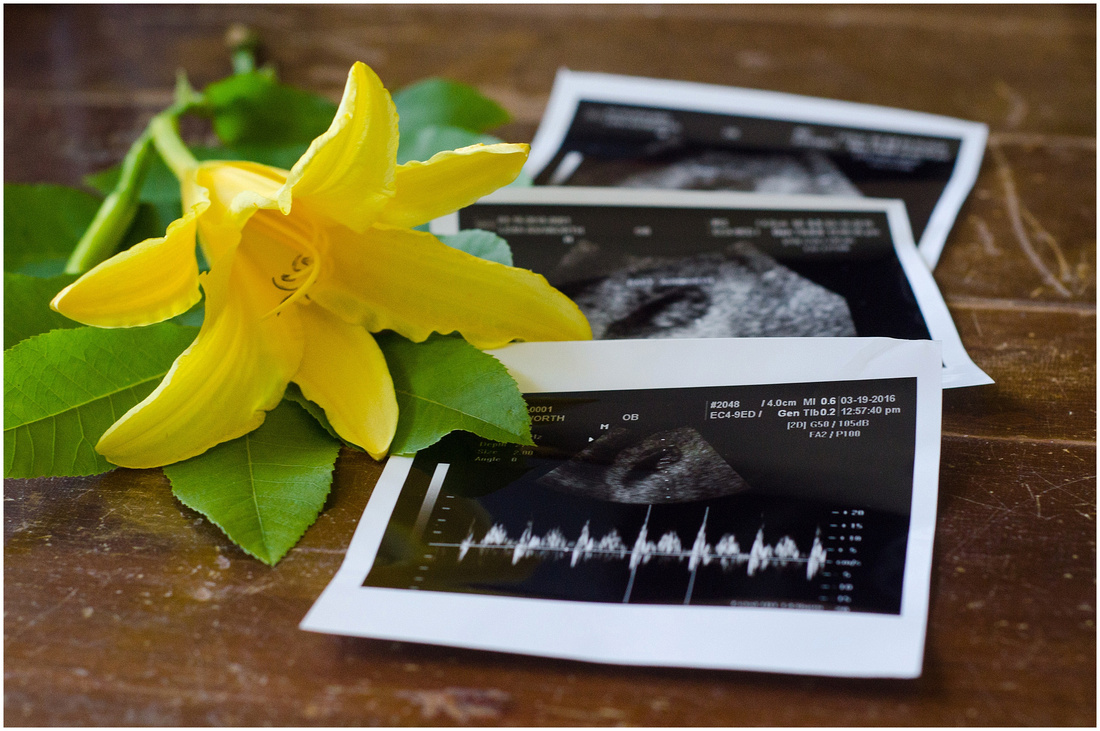 My news (and answers to questions) 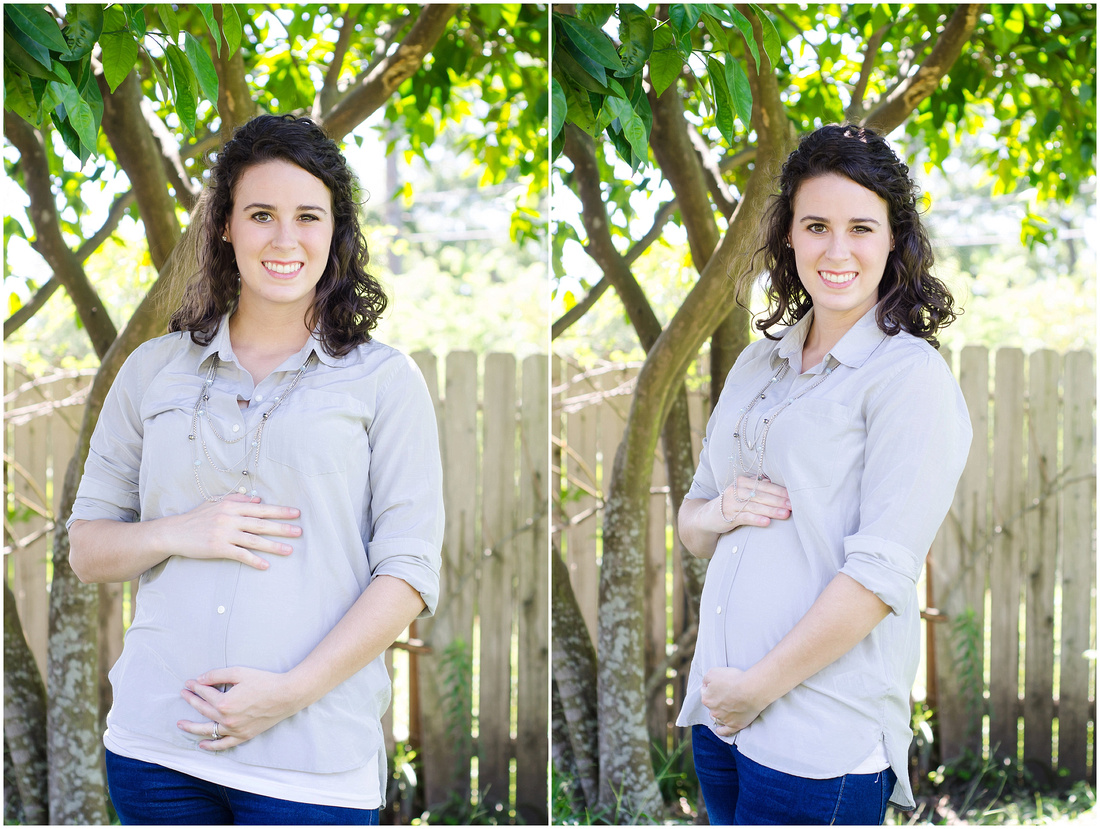 (self-portraits are hard - next time I'll have Aaron help!!!)

How are you feeling?   Slowly getting better! Still throwing up, but there's definite improvement! (Which is a wonderful thing, because it's never fun to watch what you just ate come right back up…tmi?)

Showing yet?   Depends on what I'm wearing! I think absolutely, but it could also look like too much cake.

Food cravings?   Not so much cravings as "these things I can eat and these other things I can't stand!" Yogurt is good, string cheese, biscuits, pancakes, chicken salad, snickers bars, cold liquids…and Sunday the only thing that sounded good was a bbq stuffed baked potato. And I've wanted a chocolate cake donut for almost two months, but the one time we tried to get donuts the drive thru person gave us a chocolate glazed instead of chocolate cake donut. Which was slightly devastating.

Horrible/awful/terrible/foods?   Most meat, eggs, anything that smells strongly, crackers (threw them up one too many times)…coffee for awhile, but this week that has been OK again, so that's exciting! :)

Maternity clothes?   A few. Funny story, I actually had some already (they tend to be cute, soft, and be longer so they work better with my long waist. Plus thrift stores, so…) Most of the time I'm wearing athletic shorts/yoga pants and a comfy t-shirt. I did buy a couple of pairs of pants though, and am having to do the hair tie trick with regular pants.

Hospital, birth center, or home?    Home. Unless there's a reason that we'd need a hospital. We found a fabulous midwife (who's a CNM and RN - if you're in need of one in the Houston area, I'd be happy to send info!) and between her, her assistant who is also an RN, and Aaron (RN, paramedic, and just generally fabulously skilled) I'm completely comfortable and very excited about being at home!

Finding out if it's a boy or girl?   We're absolutely planning to find out! We'll wait until the next ultrasound though (I CAN wait a few more weeks! At least I keep telling myself that…)

Names?   We actually came up with a list of baby names on our honeymoon. Slight problem, I have no idea where the list is! The name will be a secret though until Baby makes it's appearance. :)

Bought any baby clothes yet?   Not yet…but oh so tempted. I did buy a blanket that fits perfectly with the baby room color scheme and some receiving blankets though.

Nursery plans?   Yes, but also just normal house project plans. House remodeling projects kind of ground to a halt after we moved in last March, so there's a ton of detail stuff that needs to be done (trim, this one closet we never got around to ripping carpet out of/painting, painting a bookshelf, a bathroom remodel and flooring) so we'll be super busy!

Still shooting?   YES! :) Although I most likely won't be taking any sessions after mid-October and before February.

Anything else?   I cooked yesterday for the first time in over two months. I felt like that was an accomplishment!!!